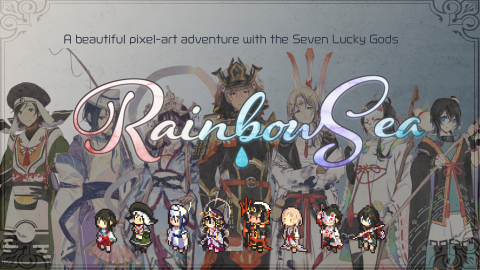 Summary :
On June 5, 2021, a Japanese indie game developer Hinuko SHIMA from Shirokurohitsuji officially released the English version of the game app Rainbow Sea for iOS and Android.
Rainbow Sea is an adventure game with beautiful character designs, isometric pixel-art, nostalgic chiptune-flavored music, and a sometimes funny, sometimes sad story. You can clear this in a couple of hours, but you can play it again and again as the story changes depending on your choices and actions, and there are many ways to reach a single ending.
Meet the Seven Lucky Gods aboard the treasure ship in Rainbow Sea; a pixel-art journey through Japanese mythology. Play FREE now on iOS and Android.

Story :
The player spends a year as Human, chosen to be a god, nurturing relationships with the Seven Lucky Gods aboard the treasure ship.
You can move freely around the ship by tapping the screen. By talking to the Seven Lucky Gods, you can get their affection.
New events will occur under certain conditions such as winning their affection, weather, and events you have seen so far. There are over 100 different types of events. You can find the conditions of each event by watching advertisements, so it is easy.
Not all of the Seven Lucky Gods characters will open up to you right away, and as you interact with them, you'll start to see what they're up to. You'll start to see what they're dealing with, and since many of them won't reveal their true colors until you get to know them, you may find yourself going through the game with a somewhat unsettled feeling.
In addition, Rainbow Sea allows you to lie, so you can hide your true feelings from the Seven Lucky Gods and change the course of the story. You can enjoy character designs that greatly reflect the personalities of each of the Seven Lucky Gods, music which is like a fusion of Japanese style and chiptune, and a bittersweet scenario.
We are also planning to update the character graphics and pixel-art animation in the near future.